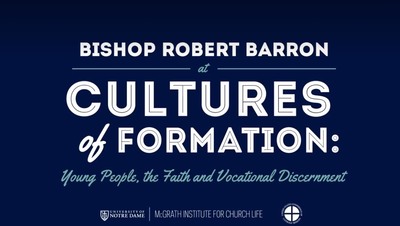 On March 5-7, 2018, the Notre Dame Studios staff supported the McGrath Institute for Church Life on the media production and live streaming delivery of the full conference and the keynote by Bishop Robert Barron of Los Angeles, California. The keynote address, kicking off the three-day conference provided an excellent overview of the current state of Catholic faith intersecting with the Millennial Generation. The talk was titled “Looking for the Nones” and took place in the Leighton Concert Hall of the DeBartolo Performing Arts Center.

Notre Dame Studios hired the production personnel, consisting of a producer/director, graphics operator, audio technician, camera operators and engineers.  The production equipment consisted of three Grass Valley cameras: one located in the rear of the venue to provide the main camera angle, one located in a box on the left aisle to provide a cut-away angle and one hidden on stage to capture reverse angles that included the crowd.  All of the audio/video signals were transported via fiber from the Leighton Concert Hall to the Martin Media Center where they were switched and mixed into the program feed that was then distributed as a live stream via the internet. 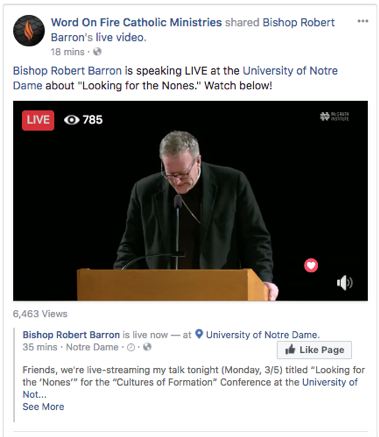 The live streaming of the event, executed by Notre Dame Studios video engineers, utilized new solutions integrated as part of  the Campus Crossroads construction. These new encoders sent the video signal of the lecture to the Word On Fire Facebook page, which has more than 260,000 followers. Initial numbers for the live streaming totaled approximately 17,000 total viewers with a peak concurrent viewership of almost 850 viewers.