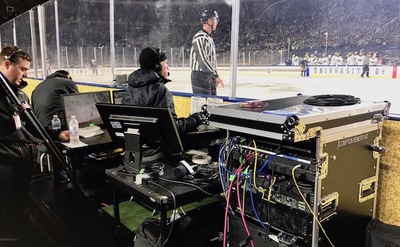 Playing hockey outdoors in the natural elements adds intensity and excitement to the game. However, it raised challenges for the engineering team at Notre Dame Studios, who assisted with the 2019 Bridgestone NHL Winter Classic on New Year’s Day. The team also independently provided all the technical elements for the Notre Dame versus Michigan hockey game live broadcast 4 days later, on January 5, 2018.

The January 5 contest was only the third outdoor game in the modern era of Notre Dame hockey. The Irish took a 2-1 decision over Miami (Ohio) on February 18, 2013, at Chicago's Soldier Field, before falling to Boston College, 4-3, a season later at Fenway Park in Boston. Hockey is normally played at the Compton Family Ice Arena, an ice facility on Notre Dame campus with purpose-built ice rinks. Notre Dame stadium, the home of the Fighting Irish football team, was never used for hockey previously.

For the Winter Classic, the ND Studios team was responsible for the technical set-up and staffing for the video board show and intermission concerts, while NBC Sports produced the live television broadcast.  This entailed coordinating with NHL game presentation representatives to fulfill the audio and video requirements for delivering a memorable fan experience while in the stadium.  Only four days later, the Notre Dame Studios team faced a much bigger challenge as they were expected to deliver the technical elements required for both the video board show and the live television broadcast of Notre Dame’s game vs Michigan on NBCSN. Their tasks included installing announcer and color positions, 10 cameras, 20 microphones, and one-off intercom communication systems. The job was so complex and the timescale so pressing, it was considered “impossible” by an NBC audio engineer who was on-site for the Winter Classic.

Aaron Creasy, ND Studios’ Broadcast Engineer, explained the specific technical challenge related to servicing the announcers, who were located in very confined spaces next to the ice rink.  For starters, the engineers had to be creative with running cable and placing equipment. 250 feet of fiber had to be extended from a broadcast service panel at the edge of the stadium to provide connectivity. In order to obtain full view of the game, they also equipped the announcers with video monitors, using their innovative remote kits which took advantage of the IP infrastructure.

To create an immersive experience for the viewers watching the game at home, the engineers placed six effect microphones on the glass panel surrounding the ice rink to make sure that all natural sounds could be captured. This way the viewers could hear the puck hitting the boards, players checking each other and skates cutting across the ice.

The successful delivery of both hockey games is the the result of months of planning, intense on-site preparation, and spot-on execution. It is also testimony to ND Studios’ solid infrastructure, cutting edge equipment and staff’s superb technical and management expertise. During the same period, ND studios also supported 5 additional athletic events on campus, meeting all the additional logistic, coordination and resource challenges.

“The key is planning and advanced preparation”, said Aaron Creasy, who feels “a great sense of accomplishment” and is “proud of the engineering staff”.

“This is something which had never been done before. We took on the challenge and made it happen”, said Scott Rinehart, Director of Broadcast Technology, Notre Dame Studios.