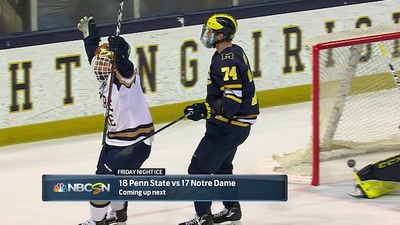 The remarkable football game broadcast partnership between NBC and Notre Dame dates back to the 1991 season. The strong bond between two iconic entities, one in television and the other in higher education and college athletics, has brought Notre Dame football to fans on multiple platforms, broadcast, cable and digital, both domestically and internationally.

The partnership grew in 2013 when NBC started televising Notre Dame hockey home games on NBC Sports Network (NBCSN). Thanks to the collaboration, the Fighting Irish have what Notre Dame athletic director Jack Swarbrick called “a more robust television program than any hockey team in the country." Entering its sixth year on NBC, Notre Dame opened the 2018/19 hockey season on October 26, 2018, featuring Fighting Irish and Minnesota Duluth Bulldogs, a rematch of the 2018 national championship game.

Prior to this season, NBC sent mobile production units including professional crew to the Compton Family Ice Arena to broadcast the games on NBCSN and contracted Fighting Irish Media to produce digital games for NBC Live Extra.  With the 2017 opening of the Rex and Alice A. Martin Media Center, as well as the production and engineering support provided by Notre Dame Studios, Notre Dame has become a one-stop production partner for NBC. In addition to the digital games, in Fall 2018, NBC contracted Fighting Irish Media to produce eight (8) live hockey games that aired on NBCSN. Expertise in live content production from Fighting Irish Media combined with the state-of-the-art technologies and technical expertise from Notre Dame Studios has made this a winning partnership for all parties.

“We are extremely excited about the partnership. It validates the vision of the Martin Media Center and Notre Dame Studios, that we are in a position to offer broadcast quality media production services to Fighting Irish Media and NBC,” said Dan Skendzel, executive director of Notre Dame Studios.

“We’ve been impressed with the investment Notre Dame has made in their production capabilities over the years. Their media facility is one of the best in the country and their production team is outstanding as well. It just made sense for us to work more closely on producing Notre Dame hockey,” said Dan Steir, senior vice president and sr coordinating producer, NBC Sports Group and NBC Sports Network.

The production collaboration also presents opportunities for Notre Dame students who work in many production roles for Fighting Irish Media. Over 30 production staff, many of them students, are needed to produce the live hockey games for NBCSN.

“We greatly value our partnership with NBC and strive to work with them in ways that facilitate telling Notre Dame’s unique story and complement our educational mission. This also allows us to integrate our students into premier linear broadcast productions which provides them with invaluable experience for their professional careers,” said Rob Kelly, Senior Associate Athletic Director for Media and Brand.

As the Notre Dame hockey team took to the ice throughout this past season the Notre Dame production teams took to cameras and control rooms to bring fans the very best in college hockey on NBC.