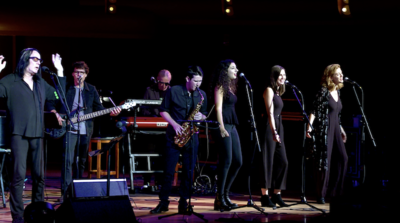 Play Like a Champion Concert: Students Play the ‘80s

Rock legend Todd Rundgren and his band teamed up with a talented group of Notre Dame students to deliver a powerful performance at the Play Like a Champion Concert: Students Play the ‘80s concert at the DeBartolo Performing Arts Center on Friday, September 7, 2018.

Over 30 Notre Dame students with various musical backgrounds performed alongside the 2019 Rock ‘n Roll Hall of Fame nominee, putting their own spin on hit songs originally produced and performed by Rundgren and members of his band- who were also a part of many famous groups from the 1980s (The Cars, The Tubes, Meatloaf, and Utopia). Teagan Earley, a junior and Film, Television and Theatre major, who sang lead vocals on “That Could Have Been Me” and “Love in Disguise”, as well as background vocals on the classic songs “Hello, It’s Me”, “Paradise By The Dashboard Light”, and “Love Is The Answer”, spoke fondly of her unique experience:

“Todd and his whole band— (Kasim Sulton, Greg Hawkes, Prairie Prince, Jesse Gress) —were so generous with their time and wealth of experience. It’s clear why so many of them have won a plethora of awards, are in the Rock and Roll Hall of Fame, and are considered rock legends: they knew their stuff, and were so quick to offer helpful suggestions and tips throughout the whole process...Overall, it was an experience I will never forget, and that taught me so much about what it means to be a performer, an artist, a promoter, and part of a team.”

A YouTube playlist has been created, featuring many of the songs from the concert. The multi-camera production was actually the result of an all-student crew. Under the supervision of an ND Studios’ producer, and with the crucial technical support from ND Studios’ engineers, a team of nine students recorded the performance and produced the videos, their tasks ranging from directing, camera, to technical roles such as shading in the replay room and camera support.

The concert as well as the video production are testimony to the many opportunities Notre Dame students have to learn outside the classroom, gaining valuable experience in professional settings. Notre Dame Studios is proud to help our students shine, both on and off the stage.